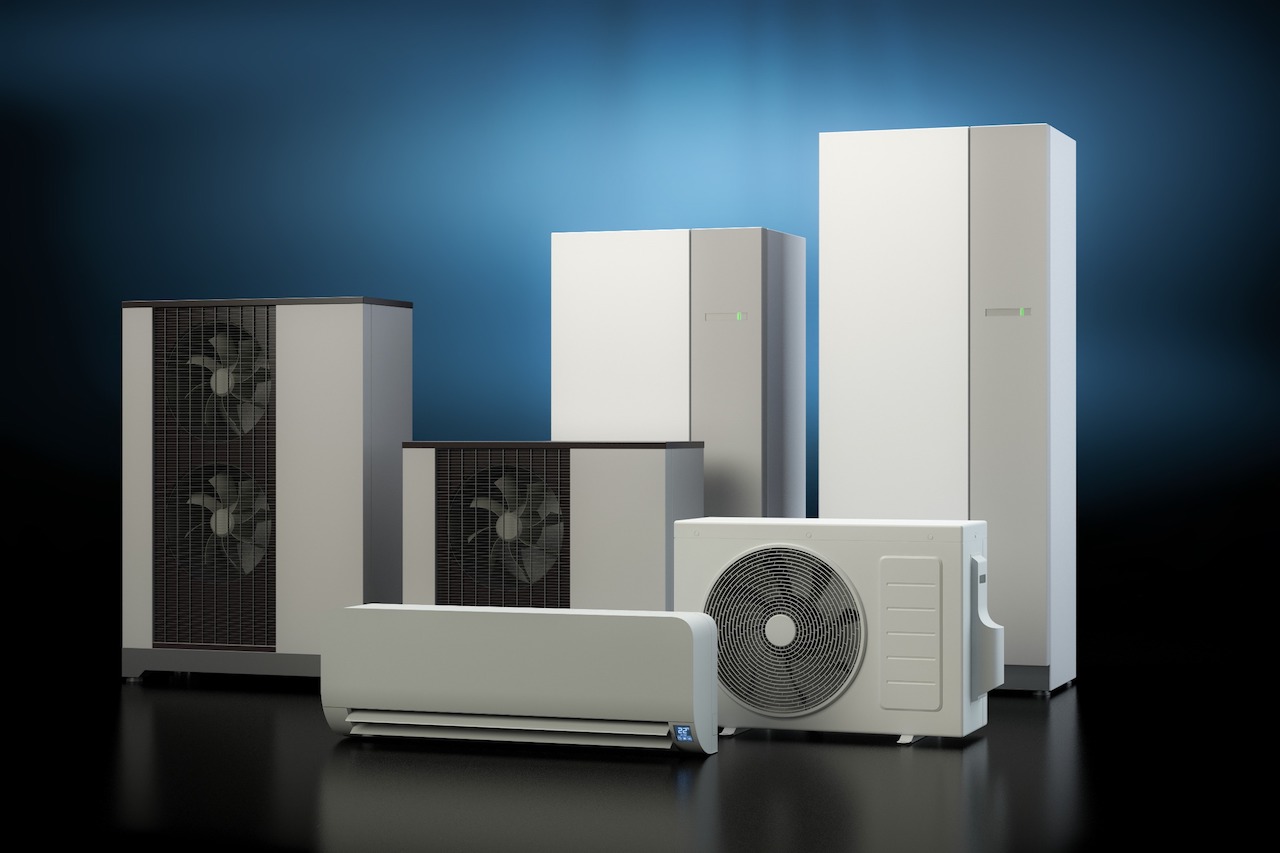 Everything You Need to Know About Air-Source Heat Pumps

An air-source heat pump can provide efficient heating and cooling, especially if you’re located in a warm climate.

When properly installed, an air-source heat pump can deliver one-and-a-half to three times more heat energy to a building than the electrical energy it consumes. In this blog post, we’ll tell you everything you need to know about air-source heat pumps and help you decide if this is the right option for your commercial building.

How do air-source heat pumps work?

A heat pump's refrigeration system consists of a compressor and two coils made of copper tubing (one indoors and one outside), which are surrounded by aluminum fins to aid heat transfer. In heating mode, liquid refrigerant in the outside coils extracts heat from the air and evaporates into a gas.

The indoor coils release heat from the refrigerant as it condenses back into a liquid. A reversing valve, near the compressor, can change the direction of the refrigerant flow for cooling as well as for defrosting the outdoor coils in winter.

When outdoor temperatures fall below 40°F, a less-efficient panel of electric resistance coils - similar to those in your toaster - kicks in to provide indoor heating. This is why air-source heat pumps aren't always very efficient for heating in areas with cold winters. Some units now have gas-fired backup furnaces instead of electric resistance coils, allowing them to operate more efficiently.

The efficiency and performance of today's air-source heat pumps is one-and-a-half to two times greater than those available 30 years ago as a result of technical advances such as:

Most central heat pumps are split-systems - that is, they have one coil indoors and one outdoors. Supply and return ducts connect to a central fan, which is located indoors.

Some heat pumps are packaged systems. These usually have both coils and the fan outdoors. Heated or cooled air is delivered to the interior from ductwork that passes through a wall or roof.

The HSPF rates both the efficiency of the compressor and the electric-resistance elements. The most efficient heat pumps have an HSPF of between 8 and 10.

A new central heat pump (SEER=14) replacing a 1970s vintage unit (SEER=6) will use half the energy to provide the same amount of cooling, cutting air-conditioning costs in half. The most efficient heat pumps have SEERs of between 14 and 18. 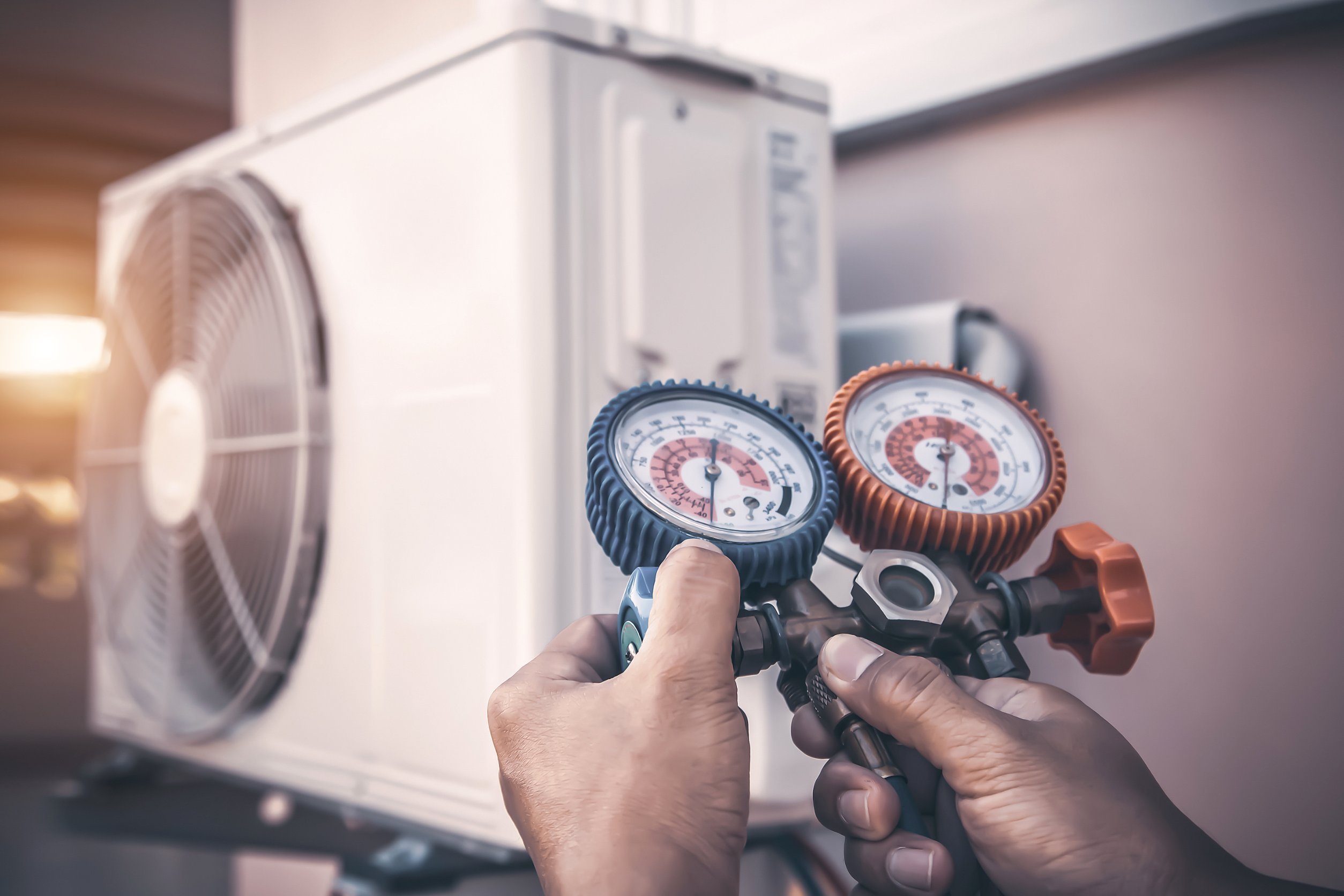 To choose an air-source electric heat pump, look for the ENERGY STAR® label. In warmer climates, SEER is more important than HSPF. In colder climates, focus on getting the highest HSPF feasible.

These are some other factors to consider when choosing and installing air-source heat pumps:

Heat pumps can have problems with low airflow, leaky ducts, and incorrect refrigerant charge. There should be about 400 to 500 cubic feet per minute (cfm) airflow for each ton of the heat pump's air-conditioning capacity. Efficiency and performance deteriorate if airflow is much less than 350 cfm per ton. Technicians can increase the airflow by cleaning the evaporator coil or increasing the fan speed, but often some modification of the ductwork is needed.

Refrigeration systems should be leak-checked at installation and during each service call. Room heat pumps and packaged heat pumps are charged with refrigerant at the factory and are seldom incorrectly charged.

For satisfactory performance and efficiency, a split-system heat pump should be within a few ounces of the correct charge, specified by the manufacturer. The technician must measure airflow prior to checking the refrigerant charge because the refrigerant measurements aren't accurate unless airflow is correct. 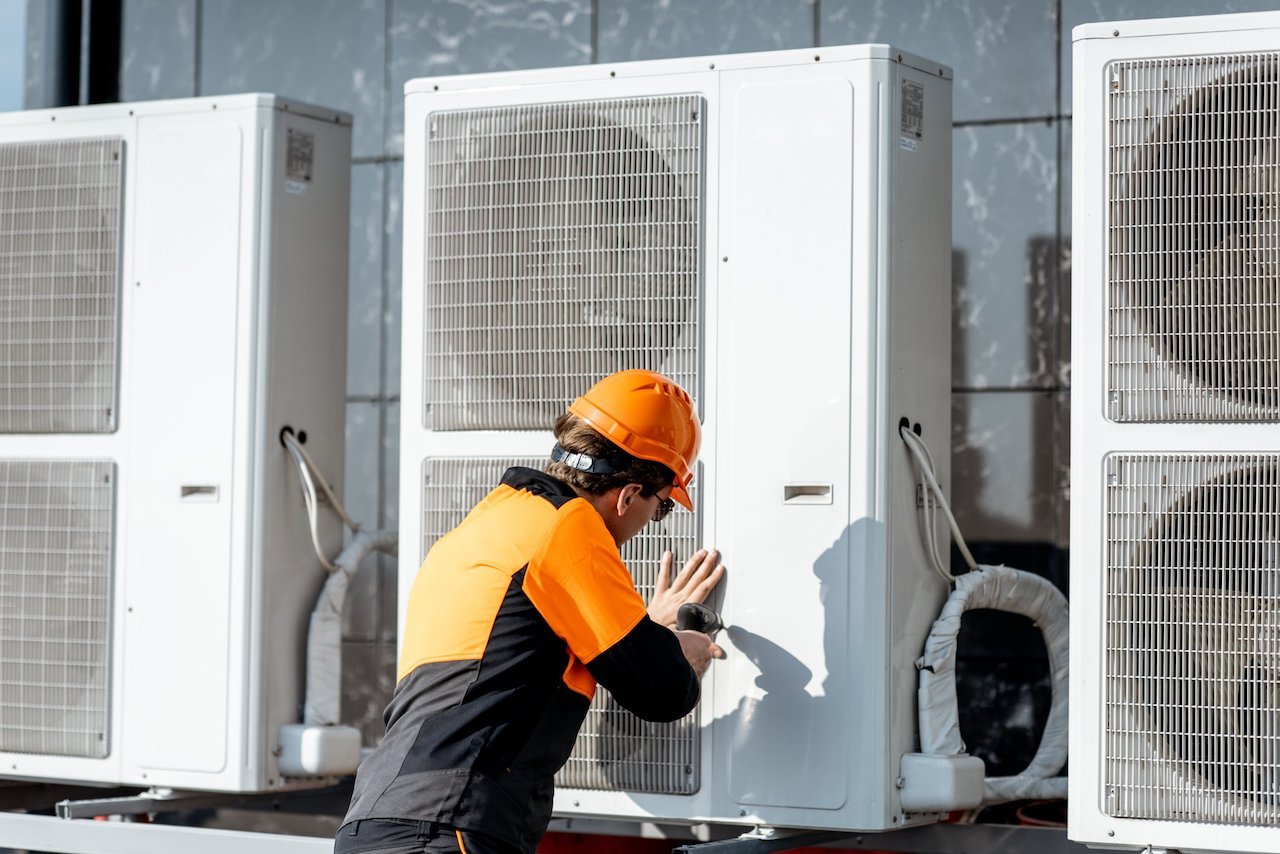 Is an air-source heat pump right for me?

Systems with gas heating as a backup can overcome this problem, however. Heat pumps specifically designed for cold climates also show promise, and reverse cycle chillers may operate efficiently at below-freezing temperatures.

One of the more notable innovations in air-source heat pumps is called a reverse cycle chiller (RCC). It offers the advantages of allowing the homeowner to choose from a wide variety of heating and cooling distribution systems, from radiant floor systems to forced air systems with multiple zones. It also offers the potential for lower winter electric bills and hotter air out of the supply vents for greater comfort.

An RCC is especially economical for all-electric homes or in areas where natural gas is not available. Depending on other fuel rates, it may even be the least expensive heating option among the remaining heating fuel choices.

The system consists of a standard single speed, air-source heat pump, sized to the heating load rather than the usual smaller summer cooling load. The heat pump is connected to a large, heavily insulated tank of water that the heat pump heats or cools, depending on the season of the year. Most systems will use a fan coil with ducts, using the stored water to heat or cool the air and distribute it to the house.

The RCC system allows the heat pump to operate at peak efficiency even at low temperatures. This provides greater comfort and economy without the need for electric resistance auxiliary heating coils.

The RCC can also be equipped with a refrigeration heat reclaimer, which is similar to the common desuperheater coil found on the high-end heat pumps and air conditioners. The combined system costs about 25% more than a standard heat pump of similar size, and the simple payback on the additional cost in areas where natural gas is not available is about 2 to 3 years.

One company has developed the cold climate heat pump, which features a two-speed, two-cylinder compressor for efficient operation, a back-up booster compressor that allows the system to operate efficiently down to 15°F, and a plate heat exchanger called an "economizer" that further extends the performance of the heat pump to well below 0°F.

Air-source heat pumps are one of the most efficient ways to heat a commercial building during the winter. They are generally best suited for warmer climates, however, there are some models that are designed specifically for cold climates.

Whether you’re designing a new system or looking to protect your existing HVAC/R equipment, TCMS can help you find the best equipment for your property. Contact us today to learn more. 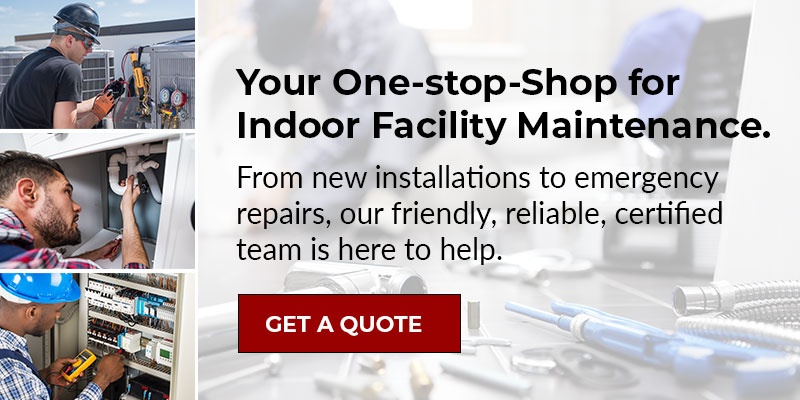 Get Updates Straight To Your Inbox

4 Things To Look For in Commercial Heating Repair 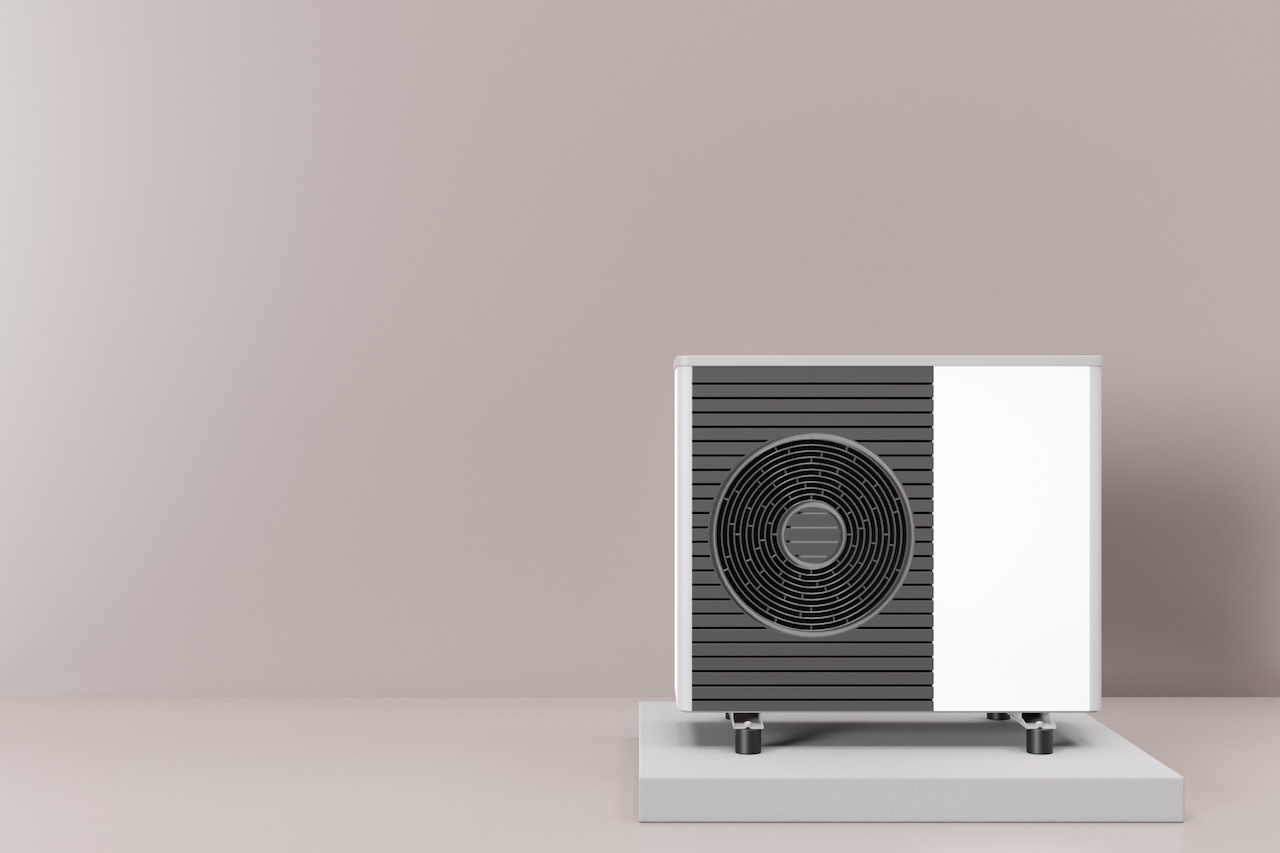 Selecting the Right Commercial Heat Pump For Your Business 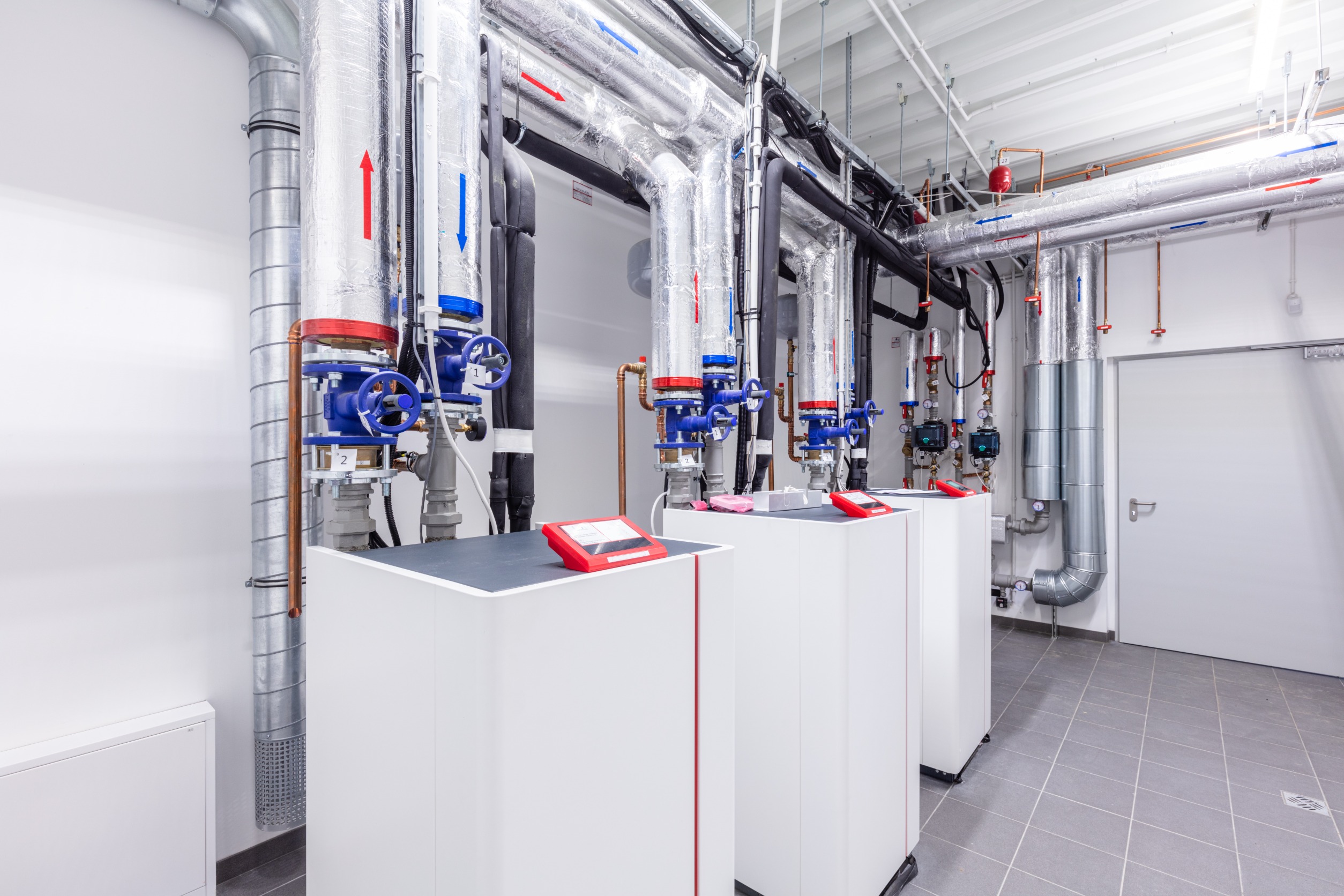 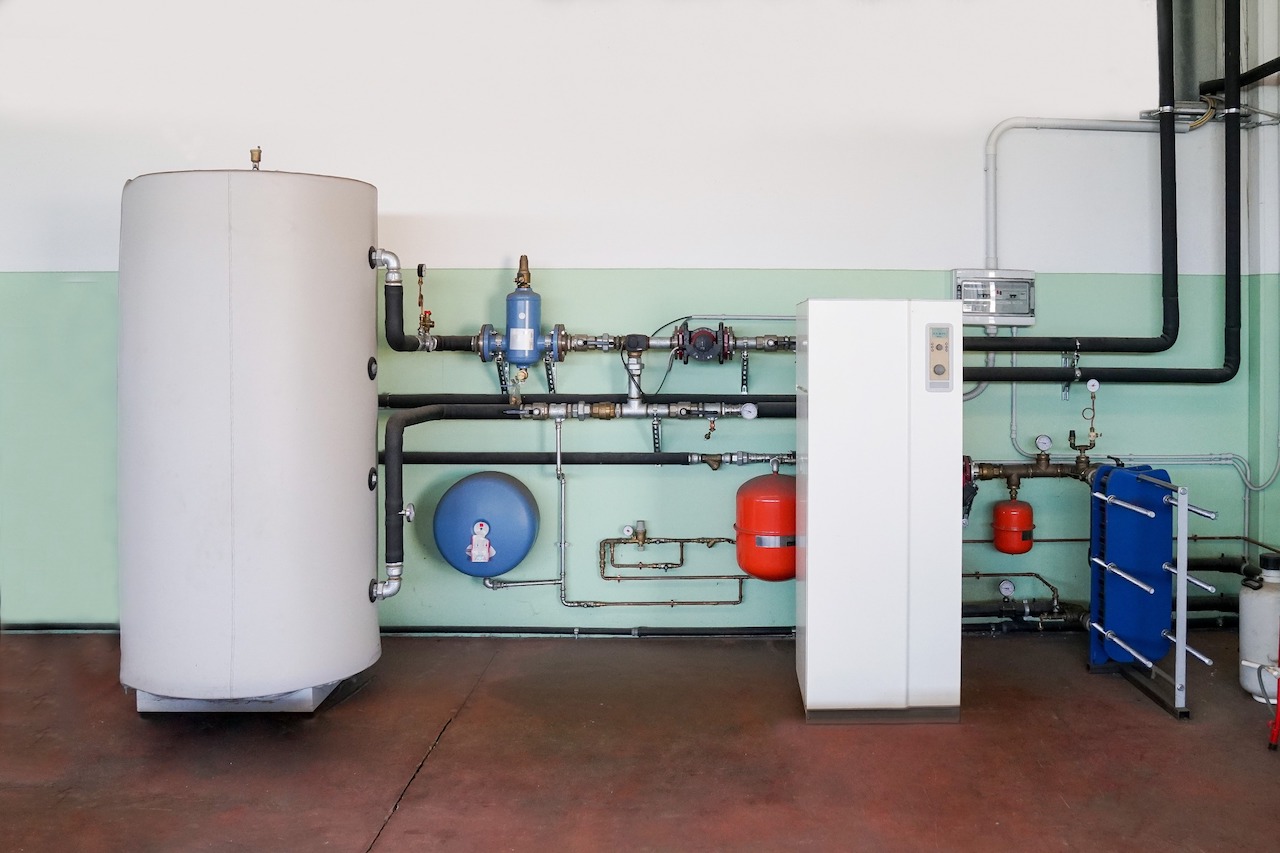 Everything You Need to Know About Air-Source Heat Pumps